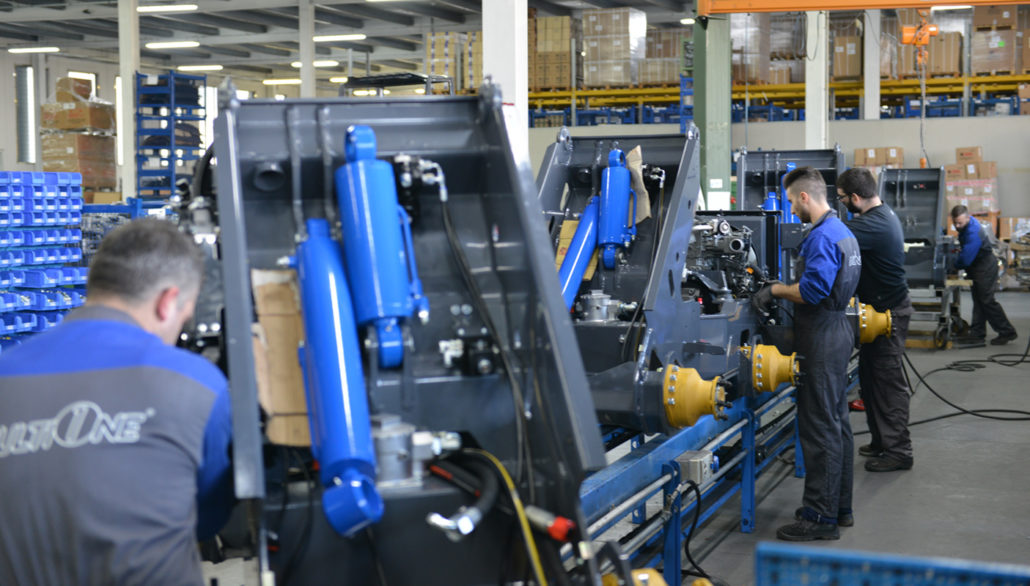 MultiOne may not yet be well known in America, but they’ve already built a reputation for class-leading quality, ability, and flexibility in Europe. With almost 20 years of development behind them, their mini loaders and attachment have evolved to do a wide range of jobs for a wide range of industries, often eliminating the need for specialized equipment.

C.S.F. has been around since 1969, building bailers, seed drills, and other agricultural equipment, but the company set a new course in 1998 that would radically alter their business. Changing their name to “MultiOne,” they brought their first mini-loader, the S25D, to market. Although primitive compared to current models, it had all the basics including a three-pump hydraulic circuit for attachments and hydraulically-driven wheels.

The following year, MultiOne was awarded 1st place for “Best Design and Multifunction Concept” at EIMA, Europe’s largest agriculture show. The line had expanded to include the SL range with direct drive wheels and servo-controlled transmission pumps for precision steering and a stronger frame for greater load capacity.

The GT series was added in 2000. It had a 4,000 lb. (1,800 kg) load capacity and could reach 13.5 mph (22 km/h,) but the real news was the new Swing Lock System. This system allowed the base to act as a rigid or jointed unit as needed, letting the operator choose stability or maneuverability. A skid steer model was added in 2001, bringing the range up to 11 models with anywhere from 13 to 50 hp. Product demand prompted the building of a new manufacturing facility.

In 2004, the line was redesigned, adding two more models and improvements to the hydraulic circuit and frame as well as a new telescopic boom. A new production building had to be built to meet ever-growing demand.

In 2008, the lineup got a new design breaking up the models into four series. This time around, the effort went toward ergonomics, improving operator comfort, and adding a new, easy-to-learn control system. The new GT950 could lift a 1.5 metric ton (3,300 lb.) pallet three meters (9 feet) off the ground, setting a record for the industry.

In 2009, MultiOne became an ISO9001 certified manufacturer. This internationally-recognized certification requires rigorous testing by a third party to ensure the company’s manufacturing, auditing, and quality control are world class.

To expand their attachment offerings, MultiOne purchased Zappator in 2011. The company had been building groundskeeping, lawn care, and industrial products since 1965.

MultiOne’s mini-loaders were updated again in 2014, adding the new 10 Series. It set a new high water mark for the mini-loader segment with 78 hp, a carrying capacity of 3,300 lbs. (2.5 tons), and a top speed of 20 mph (32 km/h). That same year, the company received a “Top Performer” award from Quality Certification Bureau Italia, an ISO certification board.

Today, the company offers a lineup that includes over 170 attachments to fit the needs of industrial, agricultural, construction, groundskeeping, and landscaping users. With 7 lines of mini loaders, these attachments can be combined with a vehicle that’s a perfect fit for any environment from nurseries to major building projects.

Want to expand the tools you have available without having to expand storage space? Stop by our showroom in Chambersburg, Pennsylvania, to see how MultiOne is revolutionizing loaders. You can find us at 4900 Molly Pitcher Highway off Route 11. You can also get here by taking the Marion Exit (Exit 10) from I81.