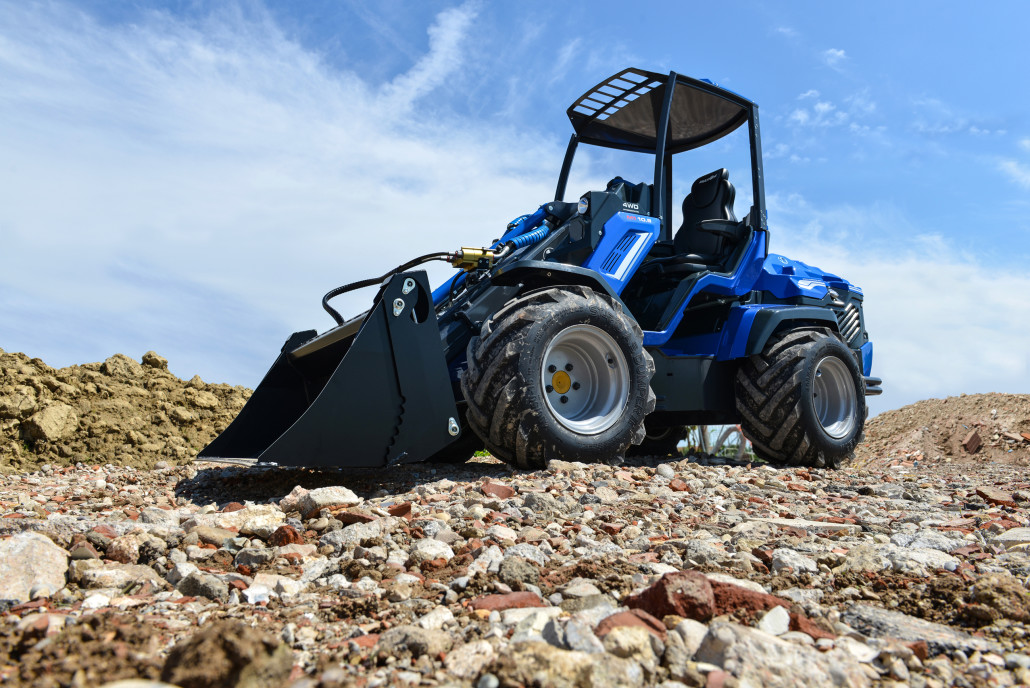 If you’re looking at an articulated mini loader, you’re probably cross-shopping it with a skid steer. Which one is better? The answer is simple: An articulated loader is better at doing just about anything a skid loader can do, AND it can do a lot of things a skid steer can’t.

A MultiOne mini loader’s boom can extend, providing four times the reach of the fixed arms on a skid steer. This means the loader needs less repositioning when loading and unloading, reducing the time it takes to complete the job.

Skid loaders are designed to provide a good lifting height, but here the mini loader still has an advantage thanks to the extending boom, offering a 10% higher maximum height than an equivalent skid steer.

While skid steers can reach relatively high, the leverage of a heavy load makes them easy to tip. A low center of gravity and integrated backweights allow MultiOne loaders to stay planted while handling up to 80% more weight.

On average, a mini loader weighs 10% less than the equivalent skid steer, making them easier to deliver to job sites without settling for reduced capacity.

MultiOne’s cabs sit up high, giving the operator a clear view ahead of the boom and everything beyond it, not to mention much better visibility to the sides and rear of the vehicle. By sitting directly in front of the engine, skid steer operators have large blind spots at the rear corners.

Getting up to speed with a MultiOne mini loader is easy. The loader is steered with a regular steering wheel and pedals like a car or tractor, while the attachment and boom are controlled using a separate stick. Skid steers use either a combination of pedals and levers or levers with hinges to control direction, arm height, and bucket angle. This tank-style steering splits directional control between the two sticks. It takes considerable skill and practice to coordinate these controls for smooth operation.

Both loaders and skid steers have frames to handle large amounts of weight, but MultiOne uses a hinged design that allows turning with far less scrubbing than the skid steer’s fixed frame.

The steering system on the mini loader lets it make precise turns while in motion, while a skid steer has to slow down as it changes direction. Add in simpler controls, and it’s much easier to maneuver around obstacles in a mini loader than it is with a skid steer.

Better maneuverability and lower weight let an articulated loader get work done without punishing the engine, resulting in higher fuel economy than a skid steer. This also means less frequent stops for refueling.

The “skid” in “skid steer” means there’s lots of scraping during turns which quickly wears out tires. With a mini loader, less scrubbing means less stress on treads for longer tire life.

MultiOne’s multiconnector puts all the hose connections into a single body that can be plugged into the loader’s hydraulic system in a matter of seconds. The separate connections on a skid steer take longer to attach, and it’s easy to mix up hoses.

Skid steers can be outfitted with buckets, pallet forks, bale spears, and a few basic attachments for forestry and pavement cleaning. MultiOne offers over 170 attachments for their mini loaders, covering all the tools available for skid steers plus tools for grounds keeping, landscaping, agriculture, and many other jobs. There’s a good chance a mini loader can completely replace a skid steer along with a few other pieces of equipment that you might need.

Visit our huge showroom at Shank’s MultiOne to see what a difference an articulated loader can make. We’re located at 4900 Molly Pitcher Highway in Chambersburg, PA. You can find us off Route 11, or you can get here from I81 by taking Exit 10 to Marion.